Signs for San Diego just had the pleasure of working with one of the best national sign companies in the US, MC2 (MC –Squared). They are exhibit, event design, and production specialists who offer corporate events, meetings, planning and production, design, construction, installation, and storage of trade shows and exhibits. They have multiple locations throughout the United States with partners located all over the globe. MC2 contacted Signs for San Diego to collaborate and work on an event together that was held in La Jolla, California. The event was the PGA Tour’s Farmers Insurance 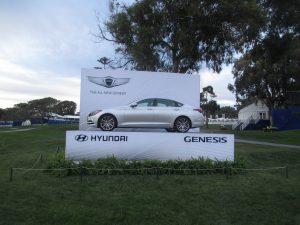 Open and it was held at the Torrey Pines Golf Course located in La Jolla, California in January of 2014. The Torrey Pines Golf Course is one of the best courses in the country; it is located over several cliffs above the Pacific Ocean where golfers admire the wonderful coastline views. Signs for San Diego’s job with MC2 on this project, was to construct, paint and install a platform that displayed a vehicle that was being promoted by Hyundai who was also supporting the PGA golf tournament. The process began with the construction of the wall that was going to be used as the background wall for m the platform; this wall was constructed and painted at the shop. 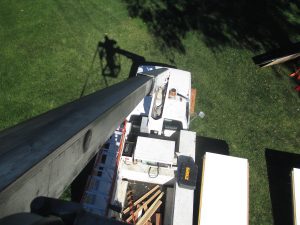 view from the bucket truck above the display

Using a new Bucket Truck Signs for San Diego has just acquired, the wall was transported to the Torrey Pines Golf Course. The Background wall was then installed on the golf course using the box truck as a crane, to lift the wall and then place it on a series of holes made on the ground for the wall. The wall itselfwas 18 x 20 ft., so it was a really large wall that had to be installed. With the help of several people the wall was installed, so the next step was to install the platform which was done easily and then to drive the vehicle that was being displayed for promotion.

As far as the tournament, Scott Stallings from Worcester, Massachusetts, emerged as the winner of the PGA Tour’s Farmers Insurance Open. Stallings listed four birdies on his last eight holes to win the tournament by one shot. He had won the tournament two times before. Five golfers tied for second place and three for third place, making it a really close end to the open. Pat Perez, the San Diego native who grew up practicing at Torrey Pines tied in second place, he mentioned his runner-up finish is “Great and bad. This is the one I want to win more than anything in the world, and I came up short”. 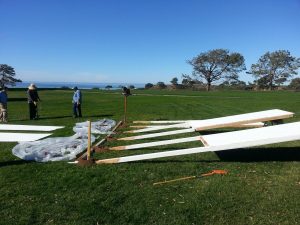 preparing a wall for the display

Signs for San Diego was very happy to be involved with MC2 playing a role of a subcontractor. To offer a world class solution to a national and world class vendor pleases Signs for San Diego very much so we would like to use this space to briefly say thanks to MC2 for the faith and confidence they deposited in us. For us, to have worked in a world class event, such as the PGA Tour’s Farmers Insurance Open, held at such an amazing venue, and being involved with a really important sign company fills us with joy.

Signs for San Diego has new equipment to help customers get that PGA feeling with their local events, championships and tournaments. Whether you need banners, posters, car wrap ads or any kind of printed advertisement, we can help you get noticed by other people. We have the material and construction knowledge to make your effort catch other people’s attention with a visually pleasing printed advertisement. Let Signs for San Diego improve your business, increase your web traffic, up people in your show room and make your phone ring.

Looking for more information on our subcontracting abilities, give us a call