The word “Neon” means different things to people. Now for the nerdy stuff: Neon was discovered in 1898. Neon, along with helium, argon, krypton and xenon, are noble gases. They are the most stable and least reactive elements. In chemistry, an atoms want to take or give an electron is its reactivness. These noble gases are perfectly happy have full valence shells and have no need to react at all. Neon conducts electricity and lights when current is applied. 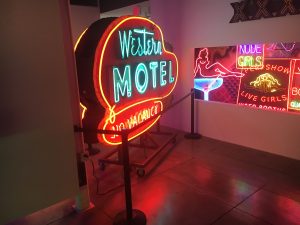 Old World Neon from the Western Motel and the topless bar

In the 1920s Neon inside glass tubes were the rage and made up signs. Las Vegas signs were iconic for their Neon. The popularity peaked in the 1950s and has been in decline. LEDs started apprearing in the 1990s and now LEDs have nearly wiped out Neon signs.

Except… where the look and classing feel of Neon is the goal.

In downtown San Diego there is a place called “punch bowl social” (www.punchbowlsocial.com) where an older, more comfortable feel was needed. It is an eclitic collection of music, food, games, beverages and Neon Signs. Signs for San Diego was fortunate enough to be a part of the signage. 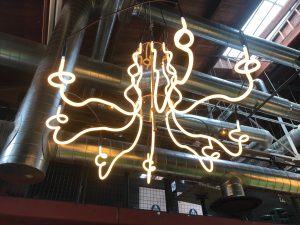 Chandelier made from Neon

Whether you need a channel letter set, a monument signs, ADA signs, wayfinding signs, lobby signs, or any other type of commercial building signage, we can help! Signs for San Diego is the best sign company for building signs. We do the more interesting, bigger stuff. Call us at 760-730-5118